The Tournament hosted the top ranked teams in the World and the GB team did a fantastic job reaching the Quarter Finals, eventually losing to Slovakia who were the reigning world champions.

The Team are now taking a well deserved break after playing 7 matches in 7 days. They will start training again in September to get ready for next years World Masters Tournament which will be taking place in Asiago in Italy.

Broughton Plant Hire & Sales offers our congratulations to the GB Inline Hockey Team and wishes them every success for next year. 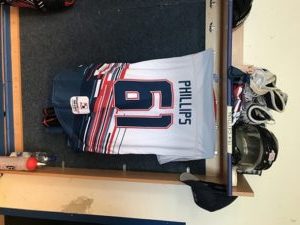 NEW PRODUCT IN STOCK AT BROUGHTON PLANT HIRE AND SALES

10 August 2022
NEW PRODUCT IN STOCK AT BROUGHTON PLANT HIRE AND SALES The modern alternative to traditional ladders, steps, the BoSS PA-lift is a next generation push around scissor lift. With a class leading platform height of 3.4m indoors and 2.6m when the outdoor setting is selected, the BoSS PA-lift is ideal for use on construction sites and in hospitals, schools, airports, shopping